The venom in the sting of a bee has been used since ancient times in China to treat a range of maladies. News of a clinic in Palestine administering 250 patients a day using the treatment caught our attention, as did the appearance of hair loss in the list of treatable conditions. 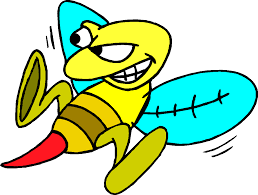 A couple of clarifications before we get going. Only females drones have stings, and only honey bee stings are barbed… meaning they leave their stinger in their victim when stinging a human or some other mammal with skin – used on other insects their stinger works fine and they are able to safely withdraw it. Honey bee venom also has the distinction of carrying a scent alarm, a pheremone which is designed to trigger the defence mechanism in other honey bees which will then also attack the poor victim. No doubt you will have seen a film or more likely a cartoon where the victim of a bee attack will run and submerge themselves in water… unfortunately these pheremones last a long time and are very difficult to wash off, so when the victim reappears from the water they are immediately attacked again.

History Of Medical Use

Since the early days of its use in China, bee venom was applied directly to site by pointing the business end of a live bee at the location where the venom is required. It was used to treat an amazing range of illnesses, from cancer and arthritus to skin diseases and chronic cartilage inflammation.

It’s use as a medication spread across Asia and the Middle East. Today, in Gaza, Palestine, Parent Herald magazine reports on Rateb Samour, a 58 year old offering bee venom to 250 clients a day to treat everything from Autism to cerebral palsy.Â  No doubt the presence of ISIS in the territory has made access to modern medicine more challenging and many are forced to queue at Mr Samour’s clinic in the absence of any other support… short of crossing the border into Egypt or Israel.

Today, the modern science of Apitherapy, as it has become known, remains in its infancy. Despite Philip Terc writing his paper “Report about a peculiar connection between bee venom and rheumatism” back in 1888, interest has existed in the potential for venom to be used to combat disease but precious little serious work has been done ti investigate further.

For now we have to content ourselves with the promise that maybe one day a distilled essence of bee sting might turn out to be the holy grail in the fight against male and female pattern hair loss. We cannot imagine too many would queue up to have bees sting their heads in the hope it triggers some regrowth, or maybe even just prevents further loss… and would this be weekly event?

It has been a long road already but it seems there is a little way to go yet.

WHY CHOOSE HIS HAIR

Thatâ€™s what you call a life changing result. Thi

Can your tell? No, I thought so. Make your hair ap