Hats. There was a time in the not so distant past when every man wore a hat. To leave home without one would have been on a par with stepping out with no trousers. These days they are far from ubiquitous, but at no time in history has the choice been so wide. From boaters to beanies and fedoras to the fez there are ample alternatives to suit exactly your mood and style. But if your motivation for wearing a hat is simply to cover up hair loss style, seems to be taking second place… so we say hats off, shoulders back and best foot forward.

Hats As Far As The Eye Can See 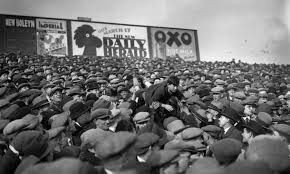 This picture was taken almost exactly 85 years ago at the Boleyn Ground – the home of West Ham United Football Club in the heart of London’s tough East End… but it could have been taken anywhere in the country that weekend with pretty much the same result. The only person in shot not wearing a hat is the lad being passed over the heads of the crowd. In those days you wore a hat. Simple. The strict code meant you took it off when you walked indoors. The practice continued right up to the aftermath of the second world war, slowly dying away during the fifties. That rigid approach to hat wearing must have been an enormous strain on someone suffering with hair loss, with no leeway at all in when you could and could not put one on… more importantly when you had to take it off.

Today the story could not be more different. Everything is about the individual and choice. Globalisation has exposed us all to style and culture from the world over and given us access to everything, from everywhere. In the world of fashion, specifically hats, this has resulted in unprecedented choice.

But Has It Made Us Happy?

The short answer  has to be no. Despite it becoming socially acceptable to wear a hat indoors, and many do, it seems to this observer that very few do it with real panache. Or even attempt it. Hat wearing hair loss sufferers almost always go for beanies or baseball caps. Of course the real challenge remains those moments when someone, a doorman or someone official, requires you to remove it. That is an emotion all of its own, the prospect of that moment is often spoken about by young sufferers as a permanent torment – it robs you of some essential social confidence, like when meeting new people and having the certain knowledge that at some point you are going to be asked what is under the hat. Better than most we understand it is trite to simply tell someone to bin the beanie. If they cannot bear the thought of leaving home without a hat then the leap is just too great. However, we do believe that you would be better seeing the hat as a positive companion as opposed to a protector of any sort. Invest in a selection of styles so you can suit the hat to the occasion, or your mood. Hopefully, when the moment comes to take it off for any reason it would just be one of your many looks that comes out… rather than giving everyone the binary choice of you with or without your hat.

The His Hair Option

If you wear a hat  permanently and any of this resonates for you then SMP might well be your answer. It has transformed the lives of many young men. To book a free consultation with one of our experts click here to find your nearest clinic.