It may not be a term familiar to many men, but Mesotherapy has quietly taken its place among hair loss solutions. Far from the first application for the procedure hair loss is just the latest problem being successfully addressed by this most modern of techniques.   History of Mesotherapy   For half a century Mesotherapy has been providing physicians with a superb option, using micro needles for delivering pharmaceutical and homeopathic medications directly to site. In the early days it was used primarily for pain relief and antibiotics, where its efficacy was proven and it became a serious branch of medicine. In more recent times, and a solution the vast majority will be familiar with, the procedure has been used for the famous Botox facelift. Just one of a range of cosmetic techniques involving the technique but by far the best known and most popular.   Hair Loss Treatment

The treatment for hair loss involves multiple fine injections directly into the affected area, delivering a solution containing minerals, vitamins and other compounds, including FDA approved DHT blockers. The micro-needling increases blood flow to the area which, along with the solution, both nourishes the existing follicles and promotes new hair growth. Because the insertion is only just beneath the skin, between the layer of fats and skin tissue, most clients experience no discomfort at all. The ability of Mesotherapy to bypass the digestive system and deliver potent drugs directly to site is key to its success. As with any preventative measure, it is important to begin treatment at the first signs of hair loss to arrest any further advance. For men it holds the promise of arresting further hair loss without needing to take FDA approved drugs which, taken internally, have a range of potential side-effects. While there are a handful of contra-indications that can mean treatment is not recommended, the procedure is safe with no side effects or allergic reactions. Mesotherapy as a Combination Therapy 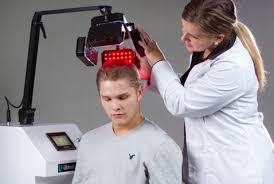 As a combination therapy, with Low Level Laser Therapy (LLLT) for example, the efficacy can be improved due to their complimentary nature – Where the massively increased blood flow achieved through LLLT aids the medication delivered via Mesotherapy in doing its work more efficiently. A Mesotherapy session lasts less than half an hour, a full course can involve up to ten fortnightly sessions. After those initial sessions you should expect to return once every 2 to 3 months for maintenance.